Elite Athletes must cope with the physical and mental demands of sport. Many athletes attribute their positive mental state to their belief in God. Having a faith in God allows athletes to be more relaxed and confident about dealing with demands and pressures of elite sport. As spectators we have seen top athletes (e.g., Kaka & Steph Curry) demonstrate their belief in God, by making the sign of the cross; pointing to the sky or through other religious gestures. Just look at Usain Bolt's prerace routine which shows his religious faith at 4.40mins.

Another example is where players and teams will give thanks to God for enabling them to compete and be healthy. Firstly, Serena Williams is seen here giving thanks to God after winning a tennis competition.

Secondly, this picture shows Russell Wilson leading the Seattle Seahawks in prayer after an NFL game. Images of team worship can be seen across multiple sports. 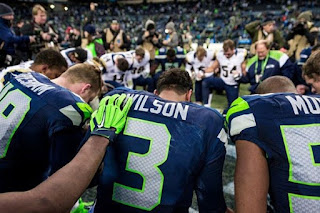 Although atheists may argue, winning a medal, a championship and any other accolade cannot be wholly attributed to God, as a God may not exist. It can be argued that faith has an impact on performance. For example, Olympic Champion Jonathan Edwards speaks about his faith when he was a competitor:
My faith was pivotal to my success. Believing in something beyond the self can have a hugely beneficial psychological impact, even if the belief is fallacious. It provided a profound sense of reassurance because I took the view that the result was in God's hands and that God was on my side. It enabled me to block out doubt before I was due to jump (Syed, 2010, p143).

Furthermore, today’s elite sporting world is results based and winning is all that matters. This causes performers to compete under immense pressure and scrutiny which can cause them to have stress, depression and detrimental mental factors. Current research explains that athletes use their faith to help them obtain peak performance (e.g., Howe & Parker, 2014; Kretschmann & Benz, 2012), deal with stress (Park, 2000) and act as a prevention against taking illegal drugs (Storch et al., 2003).  An athlete’s faith can help with dealing with pressure by acting as a buffer against stress and support network (Waston & Nesti, 2005).  One buffer technique is Prayer.

Prayer is linked to self-talk and helps athletes to relax and rationalizes situations. Precisely, statements as ‘Gods Will’ and ‘God’s Plan’ to deal with stressors (e.g., being injured; important matches) have been highlighted in research and anecdotally. An example of this can be seen in Park (2000, p.73):
I always prepared my game with prayer from the major games to the minor games. The content of my prayer to God is to help me do my best… I committed all things to God, without worry…These prayers make me calmer and more secure and I forgot fear of losing. It resulted in good play (Park, 2000, p73)
Moreover, by being religious an athlete has a second identity and feel that they have more than one purpose in life and feel less depressed especially after their sporting careers. Depression in athletes is a growing issue within sport and one that needs to be tackled. Therefore, an athlete’s faith can help them to overcome daily and sport specific demands.

Finally, we need remember that having a faith doesn’t make you automatically become a winner, but it has been highlighted on an academic and anecdotal level that it does have benefits and can help athletes perform to their best. As Olympic Gymnast Shawn Johnson explains:
Trust that God will walk with you through the hard times. Be grateful for the many ways he is working out all the details of your life so you can make the most of the gifts and opportunities he's given you. (Winning Balance, 2013)

I have recently conducted my own study which looked at the coping of religious athletes in sport. The findings of this study concurred with those identified above by highlighting the importance God played on their life and their sporting careers.